Because her family moved so often, home décor was always a passion for Arielle Cobb. Her mom was in the military and relocated baby Arielle from Denver to Germany when she was just two weeks old. Okinawa followed as her next residence, and then eventually Colorado Springs for her high school years.

“One thing mom used to say was ‘home isn’t a place, it’s a feeling’” says Cobb. “It doesn’t matter what the walls looked like. It was about making it feel like a home.”

The lesson served her well, as she later married an Air Force man, now a member of the Space Force. They met in Florida, which led to a move to Great Falls, Montana, then another back to Colorado Springs. Three kids have come along to keep Cobb, now 36, busy as a mother. But she’s never lost sight of her early dream to own her own business.

“As kids, the other girls played housewife; I said ‘I’m gonna be the boss of a business.” She finally made that a reality in mid 2019. “When I told my mom, husband and friends I was starting it, they said ‘yeah, we were waiting for you to do that.’” With Wood Knots and Whimsy, a purveyor of stylish home and bath products, she’s taken on titles of founder, designer and curator.

Cobb says that aside from the itch to move every four years by habit, she’s always scratched another itch: to create. “It’s an outlet for me,” she says. She attended Johnson & Wales University and earned an associate’s degree in advertising communications, following that with graphic design studies at University of Colorado Denver and a bachelor’s degree in business management from Colorado State University-Global Campus. Over her years of study, she worked for several small businesses, such as a now-closed denim bar named Gloss at the Promenade Shops at Briargate. She cites its owner, still a friend, as a big mentor.

While in Tampa, Florida, she worked for L’Oréal SalonCentric as a replenishment analyst for 98 stores. In Montana, for a stint, she worked a job she didn’t love, just for the paycheck. It encouraged her to rededicate herself: “If you aren’t working for yourself, you’re working for someone else making their dream come true.” Still, she gleaned what wisdom she could, enjoying her coworkers and finding a model of how she wants to treat her future employees: “like family.”

Upon arrival back in Colorado Springs, she hit the ground running. But after six months, she hadn’t made as much progress as she’d hoped, feeling despondent when her husband returned from a deployment. He looked at her goal sheet, then took a marker and crossed out the date, changing the year forward. “He said, ‘I’m giving you the gift of time.’” She laughs joyously telling the story today. And when she finally launched a website, which now features 10 unique products — from custom-label glass soap dispensers to printed ceramic coasters and cool, wooden “donut” chip clips — she admits she just “threw it together… I wasn’t sure if I was doing what I was supposed to do.” So, in October, 2019, she learned of the Pikes Peak Small Business Development Center and gave them a call to go over her business plan.

Consultant Tiffany Cox was the first to jump in with digital guidance. Months later came a single-day bookkeeping course, which gave Cobb a QuickBooks primer. “It was all so intimidating before, but they broke it down for me, so now I’m not throwing things in random categories anymore,” she jokes. And just this past month, she got one-on-one advice from SBDC consultant Janet Brugger, also the President of the Colorado Springs Black Chamber of Commerce. “I want to move into wholesale and expand my product line,” Cobb explains. “She had great ideas about how I could do it.”

“It’s extremely valuable to have people locally you can reach out to that are willing to take the time to help you and answer questions and tell you if you’re on the right path,” she says. “The SBDC has always been so informative. The people are all just so passionate about what they bring to the table. I love that. You feed off of that and it really helps you.”

To expand Wood Knots and Whimsy’s product line, Cobb says she has a notebook dating back to high school, filled with ideas. She’s just waiting for her third child to hit school age, so she can dedicate more than a few hours a day to growing the business. She’s already undertaken local collaboration with Ink and Mud Co. and envisions working with more local artisans. Some day she would like a brick-and-mortar spot, as well as participate in more markets.

Much more than helping customers turn their homes into special, intentional, comfortable places, she wants her business to thrive and create generational wealth for her children, two of whom have special needs. “That’s a part of my ‘why,’” she says, recalling an inspiration from Tampa. She and her mom had learned about some parents who helped their children launch businesses to help foster independence. “A young man with Down Syndrome owned a diner. Another person on the autism spectrum was running a hotdog stand outside of Home Depot. It touched our hearts.”

Which gets back to what Wood Knots and Whimsy’s all about: a feeling.

Visit woodknotsandwhimsy.com for more and also find Cobb’s products on Garden of the Gods Road, at Willowstone Antique Marketplace, booth 74. 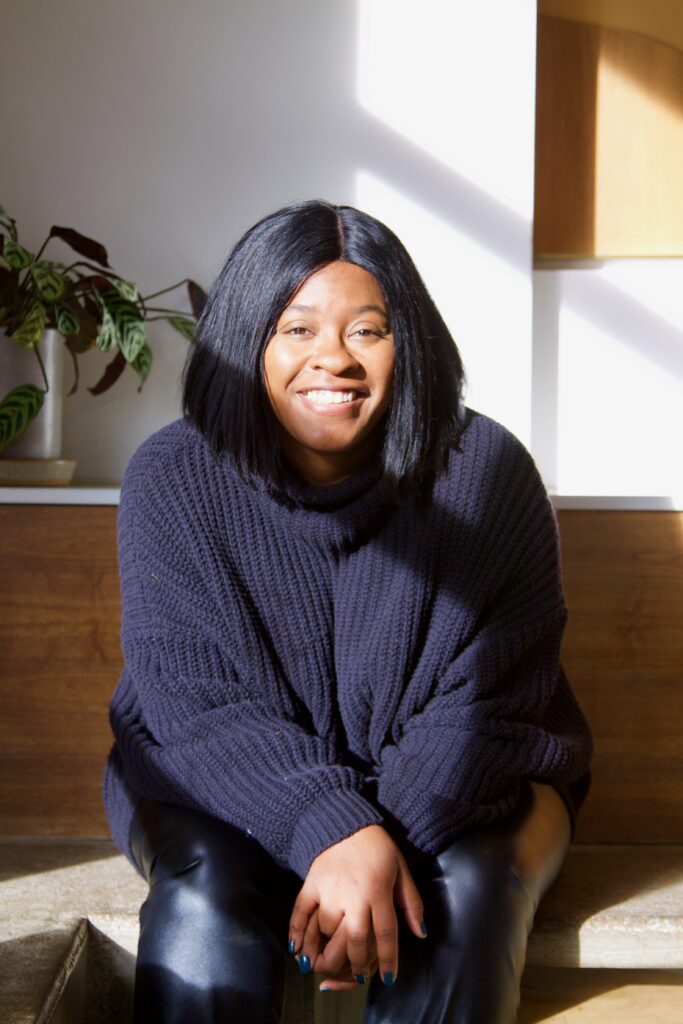 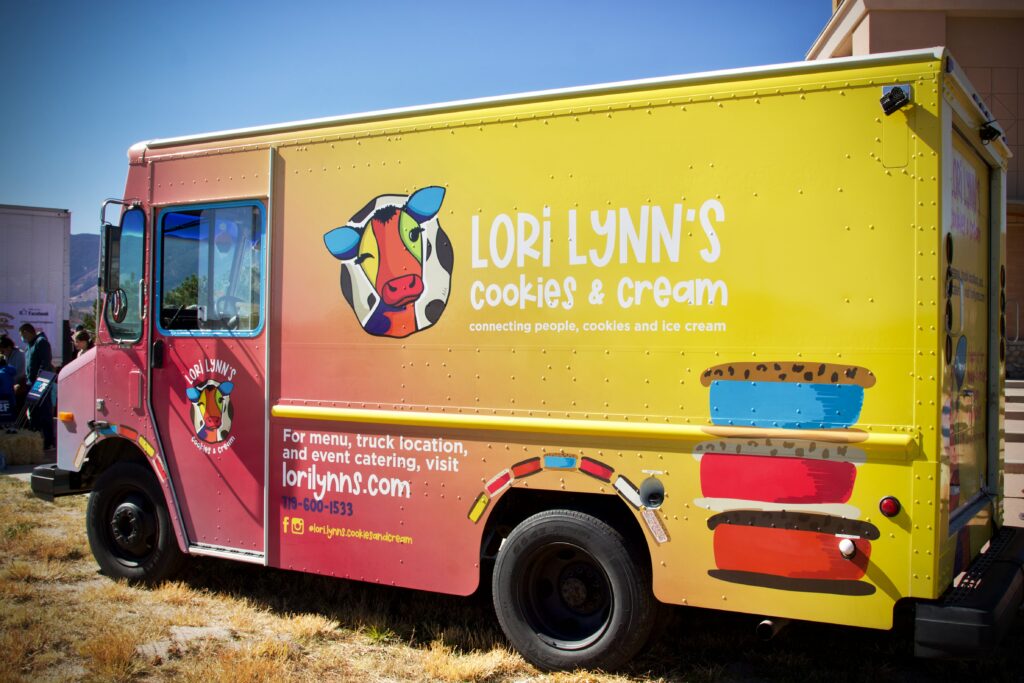 Morrissey had run a cookie delivery business locally named True Mountain Bakery between 2016 and 2019, and was ready to level-up. Shortly after the pandemic took hold in early 2020, she was searching online for business classes to help her achieve a transition into another form of getting her cookies into customers’ hands. She discovered the Pikes Peak Small Business Development Center and its nine-week Leading Edge™ program, for which she prepaid and later earned grants to fully pay herself back.

In rapid procession, she took the class in August of that year, established an LLC in September, graduated in mid November, that same month flew to Houston, Texas to purchase a former postal truck (which she lovingly named Marta), and hired a lead baker in January of 2021. By May, Lori Lynn’s Cookies & Cream truck was on the road, and in the five months since she says she’s already generated more than $70,000 in revenue. Mind you that’s with only limited, evening and weekend service, as she still holds a day job with a PR agency that specializes in healthcare strategy and marketing.

The truck has already enabled the hiring of six part-time employees, too. Four of them are 15 years old, gleaning their first job experience, allowing Morrissey a form of immediate give-back: “It’s important to me to train them and teach them a good work ethic and things like how to schedule and communicate with a boss; we work hard and earn every penny, but it’s a fun environment.”

As a mother of three daughters, Morrissey had already done something similar inside her family, helping the girls create Three Sisters Baked Goods, selling her cookies to neighbors back in 2008. She has been baking since age five, cheered on by her grandfather, who gave her honest feedback on her young recipe development and instilled a belief in her that she would be selling her cookies professionally some day. “Connecting with people through cookies has been a thread through my whole life,” she says. Her business tagline today is “connecting people, cookies and ice cream.” For her, it’s not quite religion, but it’s definitely a “comfort hobby” and “my go-to coping mechanism” — to make (and eat!) the sweet treats. She says at any given time at her house there’s at least two or three types of cookie dough frozen into balls, ready for baking on a whim. In total, she’s developed around 30 personal recipes over the decades with more coming now that the truck’s in motion. Each month, there’s a rotating flavor of the month, such as a new brown butter pecan cookie that debuted in November.

Utilizing The Cupcake Doctor’s location of Austin Bluffs Parkway as her commissary, Morrissey has created several gluten- and dairy-free and vegan recipes to cater to those with dietary restrictions. (Her GF and DF cupcakes are also sold at Colonel Mustard’s on the Springs’ west side.) Lori Lynn’s Cookies & Cream offers delivery, pickup and catering services too. And she’s hoping to move into a brick-and-mortar spot as early as spring, 2022, as well as get a second truck on the road at some point during the year.

But backing up, Morrissey’s well aware she wouldn’t be off to such a smashing start without the help of the SBDC and its many consultants. During the early weeks of the Leading Edge™ class, she developed her business plan with assistance. “I had the great recipes,” she says, “I just needed to figure out how to make everything connect for the business… I went in thinking I was going to open a brick-and-mortar bakery, but we ran the numbers and realized I would have to essentially be a cafe and serve meals to cover my costs. In talking with my instructor, Mark Bittle, I quickly realized that’s not what I wanted to be doing.”

Between her vision and input from family and Bittle, the notion of a food truck began taking shape. She traveled to Waco, Texas, where her brother lives, and he introduced her to a similar ice cream sandwich truck concept named Pokey O’s. The owner was generous with mentoring her and allowing her to tour his operation, learning the basics such as the necessary refrigeration components, scoop sizes and much more minutia. That experience put her in a great position once she returned to the SBDC class to finish crafting her business’ framework.

As Leading Edge™ students get priority over other clients working with the SBDC, Morrissey wasted no time in meeting with several lawyers to draft her employee handbooks and create a non-disclosure agreement, etc. An additional challenge at the time: she was in the middle of a divorce, and needed reassurance she wouldn’t be losing her business to it. She also met with SBDC financial planners to help structure a realistic 12-month revenue projection and “poke holes in my initial financial plan” she’d created prior. Darrell Fleck, an SBDC general business consultant who formerly owned a Dunkin’ Donuts and Baskin-Robbins franchise, “looked at my books and almost made me cry the first time we talked,” she says, laughing about it now. “But I’m happy to report that the last time I met with him he said I’m doing an amazing job!”

Another valuable mentor through the SBDC was consultant Christina Voreadis, co-owner of Go Fish Food Truck and also experienced in PR and marketing. Like Fleck, Voreadis’ directly relevant experience in the retail food world — and on a food truck in her case — proved indispensable. Via Voreadis’s professional recommendations, Morrissey connected with an area fabrication company named BN Fabrications to weld all the metal, plumb, run electrical and do everything necessary to outfit Marta for service. Next came a referral to local business Creative Consortium for her cute, slick banner wrap, built around a drawing of a cow one of her daughters created at age 14. Passersby can’t miss the colorful mobile unit, with bright pink and yellow accents.

Morrissey has continued to utilize the SBDC’s free services. They even helped connect her to a commercial Realtor to begin the hunt for an ideal brick-and-mortar spot. Simply put, she says, “They’re the best. I went from no idea to a complete business plan and a successful launch with a toolbelt full of tools, plus a great group of people backing me and cheering me on.”