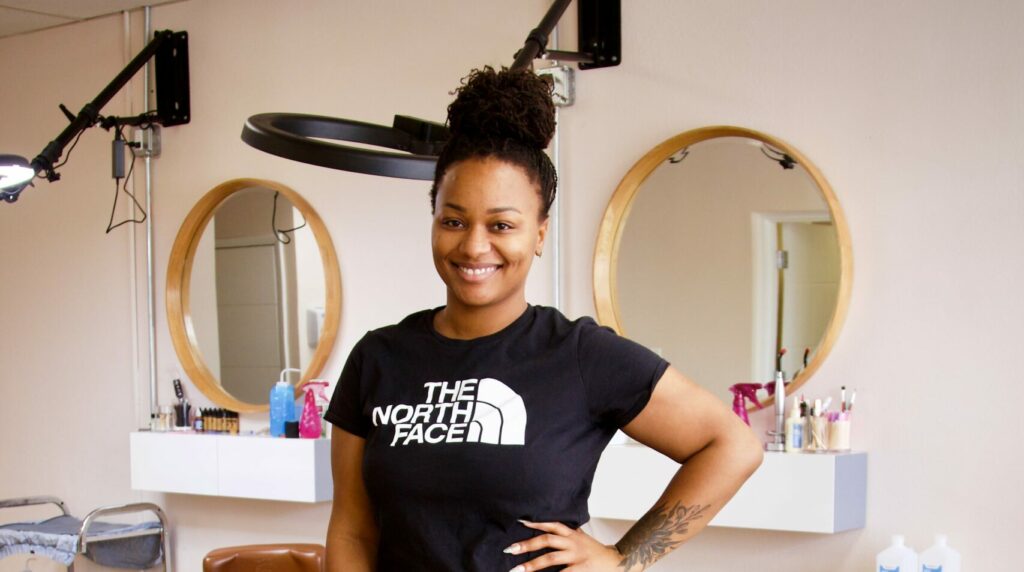 “My passion ultimately comes from helping others solve problems,” says Cashmiyr Scott, co-owner and -operator of Chloe + Maddison Skin Studio, located in Colorado Springs’ Old North End neighborhood. “This profession allows me to use artistry to help people feel better about themselves, and that to me is priceless.”

Cashmiyr specializes in a technique called micro blading, a cosmetic tattoo that replicates eyebrow hair, while her husband, co-owner -operator Rodney performs scalp micropigmentation services, another method that involves filling in balding areas to give the look of a 5 o’clock shadow as he describes it. The Scotts also employ an eyeliner specialist and traditional esthetician to offer treatments like waxing and lash extensions.

Chloe + Maddison, named for the couples’ two daughters, holds the honor of being the first standalone permanent makeup studio in Colorado Springs, says Rodney, noting other permanent makeup artists tend to work in spaces attached to hair studios. Cashmiyr too started that way, renting space inside Salon Tava off Eighth Street four years ago before the couple made the leap to their own storefront two years ago.

“I feel like we’ve brought permanent makeup to life in town, and my goal is to expose it to newcomers,” says Rodney, who has an MBA in marketing operations management, and notes a three-month wait-list currently for certain services at Chloe + Maddison.

“I got microblading done myself and realized how much of a time saver it was and how much it was doing for women, so I was instantly intrigued,” Cashmiyr says, by way of how she came to her craft. “After getting out of the military, I tried a few jobs but felt unfulfilled as I wasn’t really utilizing my talents. I’ve always been into makeup as far back as high school, so in rediscovering my passion I went to The Salon Professional Academy for esthetics and shortly after discovered permanent makeup… skin care is paramount for me so I want to help express the importance within that.”

She had served three and half years in the Army, in logistics, while Rodney counts 17 years in the Air Force, 11 of those as a reservist; he also worked in logistics for the majority of that time. Those respective experiences set the couple up well with skills that apply directly to owning their own business, but they still turned to the Pikes Peak Small Business Development Center for guidance on multiple aspects of running and growing their quickly successful enterprise.

The Scotts took advantage of the SBDC’s free workshops. And SBDC Senior Consultant on the Veterans Small Business program, and Vietnam Veteran Ron O’Herron mentored the couple, bringing not only decades of high-level business experience to the table, but a sense of camaraderie given his own military background. “He gave us valuable insights,” says Rodney, “tips on what to do and not to do, such as not growing too fast, how to secure our accounting, tax structuring, that type of thing. It especially was helpful as we moved from the old location to our new one.”

Then, when the pandemic hit and Chloe + Maddison was forced to shut down along with salons all over the state, Rodney and Cashmiyr reapproached the SBDC for help in securing both PPP (Payroll Protection Program) and EIDL (Economic Injury Disaster Loan) funding. “It was a smooth process,” Rodney says. “They communicated with us back and forth about the necessary questionnaires and forms and helped us navigate the SBA (Small Business Administration) portal. It was seamless.”

He says a big part of success is leaning into the advice of other professionals, so they’ve invested wisely in the services of other local businesses to help build everything from a slick logo to professional website. Their overall branding has attracted “all walks of life” as clientele, though almost exclusively women, including many high-power business professionals. That in itself speaks to success, especially for a minority-owned business.

“People come to us because we do great work,” Rodney says. “We just happen to be Black. They see that and know we’re Black. We don’t have to shout about it.”

But what’s important about embracing that blackness in business, he says, is “representation.” Cashmiyr is the beautiful face of the business, and she’s well represented in an inspirational way on the website and social media, even on after-care cards sent to clients. “We get feedback,” he says, “and those clients say how their daughter was so happy to see a Black woman on this card, they hadn’t seen that before. It lets them know, ‘hey, I can do that.’”